Edit
watch 02:40
World of Warcraft: Dragonflight - The Loop
Do you like this video?
Play Sound

Description: (PRESTIGE CLASS) A blackguard epitomizes evil. They are nothing short of a mortal fiend, a black knight with the foulest sort of reputation. Many refer to blackguards as anti-paladins due to their completely evil nature. A blackguard is an evil villain of the first order, equivalent in power to the righteous paladin, but devoted to the powers of darkness.

Proficiencies: all simple and martial weapons, all types of armor and shields 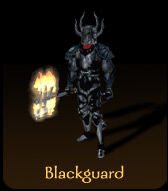 To qualify as a blackguard, a character must fulfill all of the following criteria:

Note: Getting this feat requires either a strength of at least 13 or one level of monk.

The epic blackguard is a twisted reflection of the epic paladin, the commander of legions of undead, the unholy lieutenant of evil gods, and a foul source of fear and mortal danger.

Sneak attack: increases by +1d6 every three levels after 10th.

Summon fiend: does not improve without the epic fiendish servant feat, despite in-game documentation to the contrary.