Description: (PRESTIGE CLASS) Champions of Torm are mighty warriors who dedicate themselves to Torm's cause, defending holy ground, destroying enemies of the church, and slaying mythical beasts. Torm is the patron of paladins and an unswerving enemy of corruption and evil.

Proficiencies: all simple and martial weapons, light and medium armor and shields 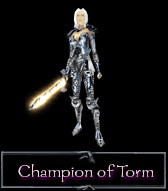 To qualify as a champion of Torm, a character must fulfill all of the following criteria:

Tip: Becoming a champion of Torm[]

Torm guides the epic champion of Torm on her life journey. She has ascended through the ranks of holy warriors to become a symbol of Torm's might.

Sacred defense: Saving throws continue to improve by +1 for every 2 epic levels.