Edit
watch 02:53
GTA: The Criminal Enterprises - The Loop
Do you like this video?
Play Sound

Description: (PRESTIGE CLASS) The defender is a sponsored champion of dwarven cause, a dwarven aristocrat, a dwarven deity or the dwarven way of life. As the name might imply, this character is a skilled combatant trained in the arts of defense. A line of dwarven defenders is a far better defense than a 10-foot-thick wall of stones, and much more dangerous. 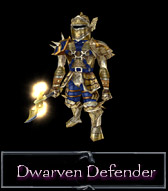 To qualify as a dwarven defender, a character must fulfill all of the following criteria:

The epic dwarven defender has become the very definition of immovable object. He is a stalwart warrior that can stand against virtually any foe imaginable.

Defensive stance: An additional use per day is gained for every two levels past 9th.