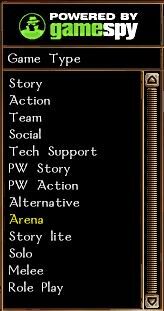 The game type of a server determines on which list the server appears for players seeking to join an Internet multiplayer game of Neverwinter Nights. This listing is optional, and is only provided if the server chooses to "post game to the Internet". The lists themselves are generated by GameSpy. Since GameSpy stopped providing this service (in December 2012), a server's game type designation is no longer seen by clients.

There are 13 choices. Each server decides in which category it belongs (by entering one of the following numbers after "Game Type=" in the [Server Options] section of nwnplayer.ini).

Retrieved from "https://nwn.fandom.com/wiki/Game_type?oldid=61804"
Community content is available under CC-BY-SA unless otherwise noted.