Edit
watch 02:30
Dead Cells Final DLC - The Loop
Do you like this video?
Play Sound

Description: (PRESTIGE CLASS) The Harpers are a secret society. Members are dedicated to holding back evil, preserving knowledge and maintaining the balance between civilization and the wild. The Harper scout performs many duties including espionage, stealth and reporting information.

Many Harpers are bards, but by no means all. Ranger, rogue, sorcerer, and wizard are common vocations for Harpers, as these classes tend to have versatility and mobility. All have some skill at manipulating others, a resistance to outside mental influences, acute abilities of perception, and a talent for solving problems. 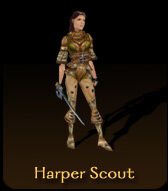 To qualify to become a Harper scout, a character must fulfill all of the following criteria:

Harper scouts are only able to attain five levels and may never become "epic" in the Harper scout class. They can, of course, gain epic levels in their other classes.