Isn't all data entry "custom content"? That is, none of it is copyrighted! I have accounts both places, but I would rather contribute here. However, most of my contributed content (and that which is coming) probably falls into the Custom category. Should I be encouraged to contribute over there? What is the status of the "to NWN2 or not to NWN2" question you posed a few weeks back? Will you be creating a totally new Wiki for NWN2? If so, when will it be up? What is the status of my scripting question (Scripting on front page)? Oh so many questions, I'm all confused. :) I would like to aim the NWNWiki Rule Set towards NWN2 and will not contribute further here if I have migration work to do later on. So I need need more clarification, please. Thanks. //Brick Thrower 12:13, 28 Nov 2005 (PST) 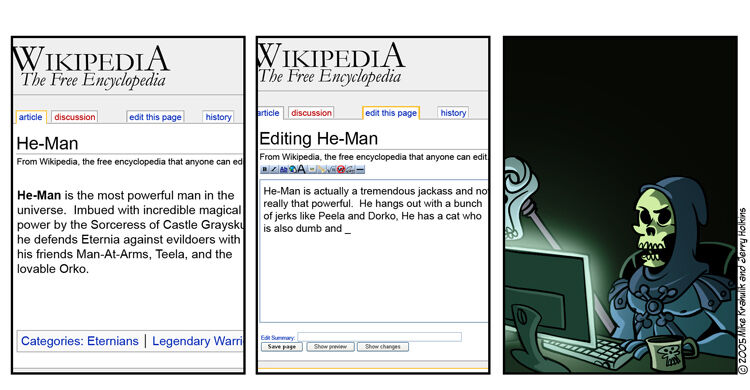 Well, I'm guessing the subtle "certain people at NWNWiki" is probably someone on this page (maybe even me). I said the whole "2nd acc = ban" in direct reference to "While I could just login as 'Rhomal' I don't see the point. So you will not see me posting there for a week, FYI." in the previous 2News post. As far as I understand it there's nothing againist changing to a 2nd account, but I do know it's perma-ban offense to use a 2nd acc to circumvent a temp-ban. As far as I knew, Rhomal was not breaking that rule since he was only using "strauss" at the time and "Rhomal" wasn't banned, neither did he use "rhomal" when strauss had been banned. I assumed he did not know of the perma-ban rule since he said he could just use "rhomal", nor did I believe he would take it as a "personal attack" in any form to state it. I've looked at the thread that got him banned, I certainly would say the last few posts near the end weren't exactly "debate". I can only assume I'm not "certain people" since he hasn't seen fit to contact me personally (either here, or via Bioware's IM setup) with any issues he sees as attacks. Minor point: I don't read NWN2News' forums, nor am I registered there. I do visit there when people link to it from here. --Defunc7 10:13, 16 January 2006 (PST)

I happen to wear under-pants not panties (or knickers). He really needs to let it go, every time he brings up these "conspiracy" sounding rivalries it looks either over-defensively paranoid or backtracking. Hell, he keeps quoting how he wants "healthy competition" then gets aggresive if we act competitively, or even make mild comments. --Defunc7 00:50, 13 February 2006 (PST)

Rhomal whines that NWNWiki doesn't give credit: "I hope you gave credit to the creater if the slow-mo ver and where you got it from. I notice thats a constant issue (giving credit) with your wiki." He's referring to this file. -- Alec Usticke 11:00, 20 February 2006 (PST)

I await the day where he descends to criticising spelling and grammar. It's funny, 'cause I, along with others, have accused him of knicking those early preview shots without giving proper credit. /:) --Defunc7 13:49, 20 February 2006 (PST)