Description: (PRESTIGE CLASS) Necromancy is usually a poor choice for arcane spellcasters. Those who really want to master the deathless arts almost always pursue divine means. However, an alternative exists for those who desire power over undead, without losing too much of their arcane power. Enter the pale master, who draws on a font of special lore that provides a macabre power all its own. 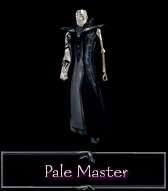 To qualify as a pale master, a character must fulfill all of the following criteria:

Upon reaching pale master levels 1, 3, 5, 7, and 9, the character gains new spells per day as if he had also gained a level in his highest caster class (bard, sorcerer or wizard). He does not learn any new spells through this ability, but for wizards it can allow higher-level spells to be learned through other means (i.e. from scrolls or later leveling as a wizard).

The pale master's bond with the undead continues to grow, as she becomes the epic pale master.

Boneskin: AC improves by +2 for every four levels past level 8.

Undead graft: Can use this supernatural attack an additional time per day for every 3 epic levels gained.

Retrieved from "https://nwn.fandom.com/wiki/Pale_master?oldid=68940"
Community content is available under CC-BY-SA unless otherwise noted.