Edit
watch 02:53
GTA: The Criminal Enterprises - The Loop
Do you like this video?
Play Sound

Red dragon disciple is a class that represents a wielder of magic discovering and embracing a draconic heritage, eventually gaining some features of dragons. It is one of the more powerful classes due to dragon abilities, and although it is nominally for those who cast spells, many players have found it more useful for characters that focus on melee combat.

Requirements: Red dragon disciple is a prestige class, so certain criteria must be fulfilled before a character may acquire this class. These criteria are the following. 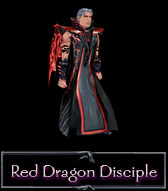 Class description: It is rumored that the magical powers of sorcerers and bards are somehow connected to the presence of dragon blood in their family tree. Red dragon disciples are sorcerers, and sometimes bards, who use their magical power as a catalyst to ignite their red dragon blood, realizing its fullest potential. They prefer a life of exploration to a cloistered existence. Already adept at magic, many pursue adventure, especially if it furthers their goal of finding out more about their draconic heritage. They often feel drawn to areas known to harbor dragons.

As red dragon disciple level increases, the character improves in base attack (BA), saving throws, and hit points (HP), with the latter made more dramatic since the hit die used to generate hit points is subject to the class' hit die increase (the constitution increase at level 7 can also provide a significant increase to hit points, +1 per total character level). The character also gets a level-dependent armor class (AC) bonus from draconic armor, the ability to breathe fire, and bonuses to certain abilities at specific levels from dragon abilities.

Embracing his draconic heritage is but one stop on the disciple's life journey. His quest to understand and harness his draconic energies has taken him into the realm of the epic.

In the epic class levels, hit points continue to accumulate, but now using 12-sided hit dice courtesy of the final hit die increase. The armor class bonus from draconic armor continues to improve, as does the damage from dragon breath. Also, the DC of saves made against the dragon breath starts to improve based on class level.