Description: (PRESTIGE CLASS) Shadowdancers operate in the border between light and darkness. These nimble artists of deception are never completely trusted but always induce wonder when met. Despite their link with shadows and trickery, shadowdancers are as often good as evil. They may use their incredible abilities as they wish.

Shadowdancers often work in troupes, never staying in one place too long. Some use their abilities to entertain. Others operate as thieves, using their abilities to infiltrate past defenses and dupe others. All shadowdancer troupes maintain an aura of mystery among the populace, who never know whether to think well or ill of them. 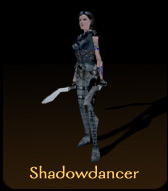 To qualify as a shadowdancer, a character must fulfill all of the following criteria: