Description: (PRESTIGE CLASS) A shifter has no form they call their own. Instead, they clothe themselves in whatever shape is most expedient at the time. While others base their identities largely on their external forms, the shifter actually comes closer to their true self through all of their transformations. Of necessity, their sense of self is based not on their outward form, but on their soul, which is truly the only constant about them. It is the inner strength of that soul that enables them to take on any shape and remain themselves within. 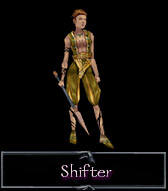 To qualify as a shifter, a character must fulfill all of the following criteria:

The epic shifter is a true master of shapeshifting and is able to become virtually any creature imaginable by choosing epic bonus feats.

When in another form, some of the benefits of the shifter's weapons, armor and other items may still apply, merging with the new form.

The below table lists the shifter shapes, which item properties merge, and which feat provides the shape.

Retrieved from "https://nwn.fandom.com/wiki/Shifter?oldid=46777"
Community content is available under CC-BY-SA unless otherwise noted.